Sangh Shiksha Varg is an elite institution where transformation of ordinary SwayamSevaks into extraordinary torchbearers, of Sanatana Dharma, begins.

Great Lakes HSS division chose not only to plan and execute this Varg for their Swayamsevak(s) and sevika(s), but was entrusted with doing so for Bhuttanese youth. This was the first national Bhutanese Youth Camp. This is a matter of great pride and honor for our division.

Varg was officially inaugurated with the lighting of the lamp by Vibhag Sanghchalak Sri. Vimal Ji Patel, followed by Udghatan bauddhik by Sri. Darshan Ji Soni. Shiksharthi(s) were introduced to each other via ice breaker games as they will be bunk mates, camp mates for the next five days!.  The first evening at the camp then concluded with shiksharthi(s) breaking away into their gana(s).

It was this Varg’s great fortune to have such stalwarts of HSS as shikshak(s), as Ma. Saumitra ji Gokhale, Sri Siddhesh ji Shevade, Sri Yashwant ji Belsare, Sri Darshan ji Soni, Smt. Anjali ji Patel, Sri. Srikanth ji Basarkod and others . Under 3 their expert tutelage, Shiksharthi were cycled through various Vishay, Bauddhik, Khel, Yoga, Niyuddha, Dand, to name a few. Days began at the crack of dawn, at 6am and the camp immersed itself into an intense routine to cultivate characters with such tenacity to prevail over all physical and mental challenges that are strewn in the path of struggle for “Vishwa Dharma Prakashena Vishwa Shanti Pravartake”. For a fledgling Vibhag, this Varg was a giant leap in the noble and lofty goal of organizing and uniting Hindu(s), capable of going shoulder to shoulder in the fight to establish world peace by following the principles of timeless and universal Dharma.

A total of 56 Swayamsevaks, and 40 sevikas participated in the camp, with about 20% of the participation by the high-schoolers there was plentiful energy in every event as evident in the Indian style games played in the camp. 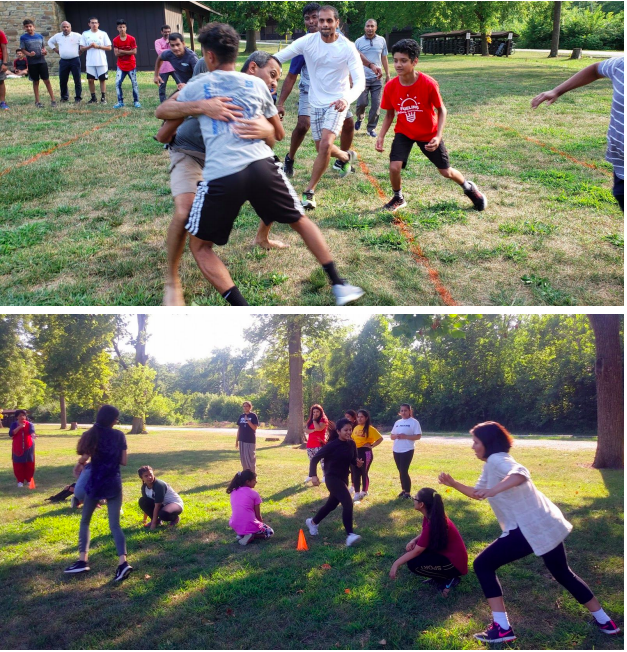 Ideological connection of our work with shiksharthi(s) happens during Baudhik sessions; "Who we are as Organization (Intro to HSS), What are the qualities of a SwayamSevak and Prarthana and it's meaning were delivered excellently by vakthas (speaker). Samvad sessions were very lively with interaction fro all SSV participants. BYC Buadhik sessions were focussed on Hindu Identity and Hindu Dharma tenets. Baudhik topics were chosen with the intent to equip karyakartha(s) with tools to organize and strengthen their shakha. Civic Engagement, Community responsibility, and 'Gata, Pata Sampark-tools for Shakha work'  were the most engaging topics among the shikshartis. Prathamik SSV is the inception to structured grooming of karyakarta(s). Therefore this was a good opportunity to reflect on the journey that shikshartis have taken so far and asses if they understand 'Swayamsevak tva - Meaning of being SwayamSevak', and if they been executing 'Sangh Karyakarta's dayi tva'.

The palpable energy Bhutanese Hindu Youth, brought to the saayam vandan was so contagious, that the whole camp was buzzing with positivity. Bhajan renditions by Bhutanese Hindu Youth were sheer magic. The BYC participants who do bhajans at home on a regular basis were fantastic in their tempo, rhythm and crowd involvement.

A week full of learning left every attendee with a better understanding of the great civilization we belong and have the responsibility to carry forward to the generations to come, and promote Dharma and achieve universal Peace.